But Is It, You Know, A Support Thing? 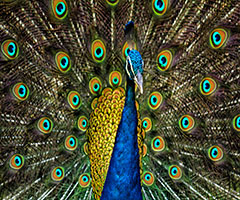 In 2014, a woman was escorted off a US Airways flight when her pig, named Hobie, defecated and squealed before the plane took off.

In what I feel surely was not an emotionally shattering verdict for performance artist Ventiko—who, not incidentally, I have never heard of—her “emotional support animal” was denied passage on a United Airlines flight from Newark to Los Angeles this past Sunday. Her support animal was a peacock.

But the headline of the week was the variation of the one in today’s Crain’s Chicago Business and that now is running around the world like swine flu in 1918: United bars emotional support peacock from flight. The headline in The New York Daily News is better. So is the photo. And the story on the BBC News website digs a little deeper.

As it happened, I spent my teen years living in Arcadia, Calif., not far from the L.A. County Arboretum. The house I grew up in is about a mile away, as the peacock flies. And trust me: they can fly. They’d land in the garden of our house at night, and screech their lungs out. We’re not talkin’ tweets, here, people.

But like the other preening two-legged bird-brain featured on national TV last night, peacocks can be aggressive, are tallish, and are blazed with plumage you don’t expect in nature. If you get too close, they’re smelly. They also are astonishingly loud. Might Trump be jealous?

If you’re an artist, I’m guessing the emotional-support-animal bit is that the male of the species occasionally displays an alluring panoply of colors from its hind end. (Just to be clear, I’m not talking about Stormy’s POV here.) Just conjecture, but perhaps performance artist Ventiko derives inspiration when the bird unveils its feathered fanny. Come to think of it, maybe Stormy is jealous.

But it’s a bird, right? If Ventiko wants her peacock to fly, she just needs to open a window. Instead we’re treated to a photograph of a two-plus-foot-long Indo-Ceylonese forest bird with a four-plus-foot-long tail perched on the handle of a luggage trolley at Newark International. (Lovely plumage.)

Of course, with respect to managing corporate reputation and the valences of “good” or “bad” publicity in the Tweeterama that passes for contemporary media culture, United Airlines hasn’t had the smoothest flying recently. Overbooking as a matter of course, denying seats to frenzied passengers, dragging doctors off flights, and proving almost inconceivably tone-deaf when it comes to communicating after the fact. That’s United.

I don’t know whether its management team is laughing or crying about the feathered two-by-four that just smacked ’em in the face. Since it’s likely they’ve figured out why they’re on the receiving end of this stunt. For stunt it surely is.

Don’t believe United didn’t subscribe wholeheartedly to publicizing this incident, even though I’m relatively certain they didn’t plan it. (But, who knows …?) The episode neatly fits the recent suggestion in the media that airlines need to tighten the rules about traveling with so-called care animals—a suspect practice anyway, in my view, since the person flying gets to board earlier (at least, that’s what happened on my recent trip to San Diego) and the person flying with said animal often looks less in need of emotional support than prix du cialis en pharmacie the average Marine. (You know who you are, tattooed and sleeveless Chicago-to-L.A. passenger accompanied by Jack Russell terrier.)

A jaundiced passenger might offer that an individual who believes they need a companion animal might just as easily make friends with the animal sitting next to them. You know, the one that talks.

Ventiko is manifestly seeking publicity: she had been told at least three times before she arrived at the airport, “That bird ain’t gonna fly.” And publicity she certainly received; she’s probably the most well-known performance artist in the world right now. From preening to prancing, and now dancing with glee.

With the assorted parrots, petrels, and peacocks patrolling the national stage these days in our dubious simulacrum of a government, it’s a welcome change of pace to see a performance artist get a headline instead of a president, whatever one might think of her oeuvre.